work > Vertigo (Between the Deaths)

My project made reference to Hitchcock's film Vertigo, as a formal anchor to the notion of falling, and as a way to relate to both the presentation and content of the photographs. Hitchcock's film opened up the idea of falling into the more dreadful idea of the ground of certainty itself dropping away, as a consequence of losing the ability to reliably distinguish between truth and fiction. In reference to the film’s spiralling ever-deeper into interconnected truth, fiction, and deception, I wanted to create a crossing over between the exhibition content, its framing devices (which designate the border between the art and real life), and the not art of real life. I wanted to create this effect of a mise en abyme, given in the film when Madeleine appears haunted by a ghost whose portrait she visits. Her demeanour, dress, and hair-style mimicking the portrait so that she appears to us viewers as though the painting itself has escaped its realm of representation, and is directing her actions in real life. As we viewers learn in the second act of the film, this scene almost reveals the truth. In fact, Madeleine is an actress, whose performance is calibrated to deceive the lead character of the film (and us, viewing the film through his eyes). In order to reproduce this concatenating effect, wherein it would appear that the representational is conducting the living, I hired two actors: one to impersonate me and another to transform herself into a living mirror to the figure photographed in the gallery.

Both actors infiltrated the exhibition and its environs over a five-week period. Their performances were not announced or identified as such, so for a period of time, their behaviour was encountered as inexplicable, motivated not by art, but by undetermined motives.

As the actress visited the gallery where Fall In took place, she stood fixed before Cummings’ photographs, unmoved for approximately thirty minutes at a time, appearing as any other spectator. As the visits accumulated, she gradually incorporated costumes and props into her visits, mirroring those depicted in the image on display. By the final days of the exhibit, the actress assumed the same prone position as the figure in the photograph, laying herself before the image, reflecting its pose, dress and manner.

The actor impersonating me had a related role that existed outside the representational realm of the gallery. He was instructed to follow a series of actions, all intended to anchor his status as the artist. These included attending the celebratory artists’ dinner hosted by the gallery, coordinating and attending visits with my friends (who were not informed that someone else would arrive in my place), arranging and attending studio visits with gallerists, staying overnight at my father’s house, and finally, photographing the actress as she visited the gallery for her vigils.

The project record and documentation, disguised at first glance as a cheap paperback novel, formally mirrors the internal-external relationship between original and imposter / artist-imposter and spectator-imposter. Having located the novel upon which Hitchcock based his film Vertigo (a French-language crimi called d'entre les morts, or "Between the Deaths"), I translated this work word for word, too faithfully, from French to English, intimately and literally doubling the text. The text contained within the shape of a novel is overwhelmed by its French original, haunted, and overpowered to the extent of limiting its readability. My role as a translator is also a performance of infiltration, like that of my actors, which can only be perceived by recognizing the strain the enactment places on the definition of this role. Between the two parts of the story (in part one Madeleine’s deception is believed as credible, whereas in part two it is peeled away) the photographs of the actress' infiltration of the exhibit taken by my imposter are bound. The novel was also displayed as my work in the exhibition. 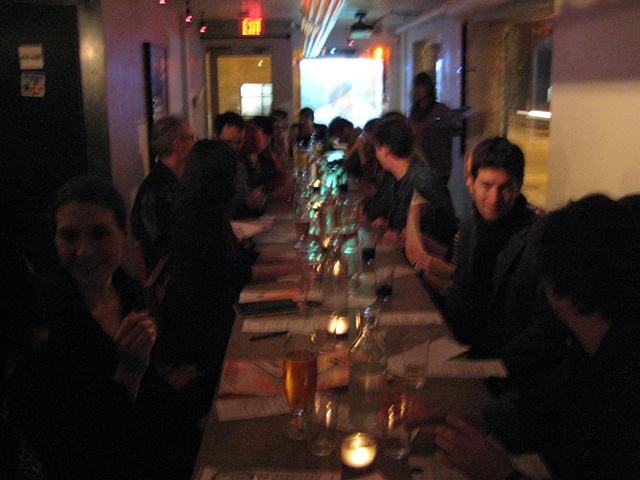 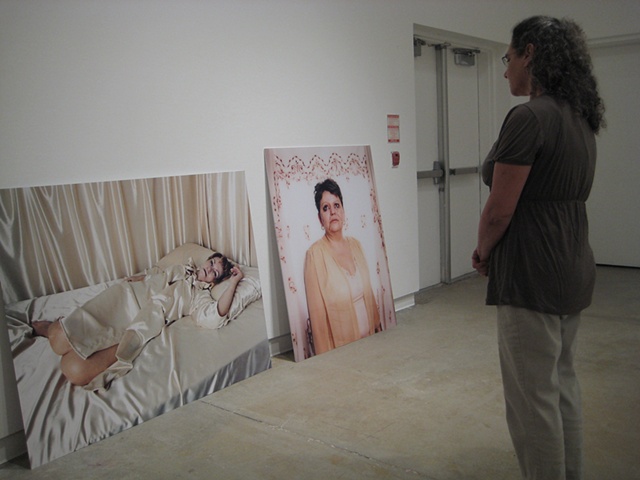 Visitation
Between the Deaths (Vertigo) 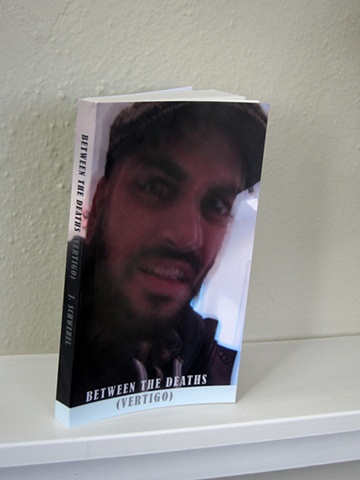